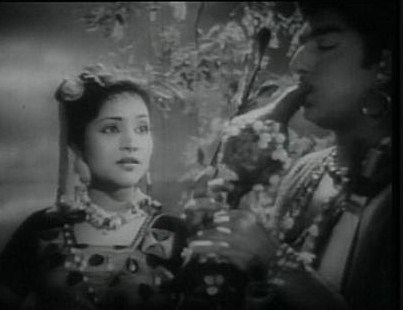 Yes, I finally got to see Nagin (1954), in its entirety…  In terms of plot and character, the best way to describe this, as a lot of people know already, is “Romeo and Juliet in the jungle with snakes.”   The snakes are there because the two tribes at the center of the story are engaged in a feud due to economic competition in the sale of snake poison – that part, granted, is a bit different.  There’s also a very unwanted arranged marriage that’s going to take place soon (since this is an old Indian movie, after all), and the ending is somewhat different, too (at least the very ending is)…  Plus, the execution of this plot, as it progresses, is rather strange.  However, I wouldn’t call Nagin exceptional overall in its basic story and plot developments, etc.

Not that the plot and characters are bad, but these aspects of the film don’t inspire me to write a whole lot.  If you’d like to see a good review that sums it all up very well, see The Illuminated Lantern; this person says everything I might have said if I wanted to take the time to go into so much detail.

On the other hand, there are a few things about this film that do inspire me to write something, because they made Nagin a very delightful experience for me.

First, there’s the music.  The soundtrack, composed by Hemant Kumar (aka Hemanta Mukherjee) is quite amazing.  The famous snake-charming song, “Been Music” (which is also the intro to “Man Dole Mera Tan Dole”), actually features the first use in HIndi films of a synthesizer – i.e., the claviolin.   (And anyone who’s seen this blog in its earlier stages knows that I can be very fond of synthesizers, strangely enough – I even once promised that they would be a big ingredient here.)  Of course, this song is not classic simply because of that claviolin usage; it’s the melody, too.  That melody is composed by another music director, Ravi, and the musician Kalyanji Virji Shah has a signficant role in this.  (You may recognize Shah from another song that I posted recently…) Together, they produce something that will entrance you and hook you in.

The rest of the soundtrack is very fine also.  In fact, even though “Been Music/Man Dole Mera Tan Dole” is obviously the biggest hit in this movie, I don’t even think it’s my favorite.  My favorite has to be “Jadugar Saiyan,” with such catchy and sweet instrumentation combined with that great singing by Lata Mangeshkar…

Plus there are many more songs worth listening to.  Most contain fine singing by Lata, though there are a couple in which Hemant Kumar does a good job singing his own tunes (picturized on the lead actor, Pradeep Kumar).  And by the way, to hear it all for yourself (if you don’t see the movie first), you can download that soundtrack at Music from the Third Floor.   (Just note, though, that you won’t know how to download music from this site until you start looking at the comments.  It took me a while to figure that one out.)

Now for the second reason that this film is so delightful… I might have already made that obvious.  In case I haven’t, here’s another hint, in the clip for the song “Sun Re Sakhi More Sajana Bulaye”:

I understand that this was a big breakthrough movie for Vyjayanthimala.  Not that she hadn’t done great stuff before… For instance, I love some of her dancing that I’ve seen in clips from Bahar, made in1951.  But Nagin was a much greater hit than anything she’d been in earlier.  Additionally, I think she’s more beautiful in this than in her earlier movies.  In Bahar, she still looks like a bit too much of a teenage kid, and I’d say the same thing about a scenes I’ve seen from Lakdi.  Even in Nagin, she’s barely 18, if that old, but she is more impressive here.

The third reason to be simply delighted by this movie is those crazy color scenes, with those wild sets, near the end.  They are so fantastic – simply, totally out-there…  And, while they’re very dramatic sometimes, they can also be very funny.

By the way, I think there are two songs in the color excerpt above, “Teri Yaad Mein Jal Kar Dehk Liya” and “Unchi Unchi Duniya Ki Deewarien.”  There’s a third song in the color part of the film that’s not included above, “Sun Rasiya Man Basia”:

There also seems to be a lot of instrumental music in between songs that doesn’t belong to any song, or else it’s just hard to tell which song we’re in (even while selecting the songs through the DVD).  It’s really all just one long song and dance through delerium.

In a way, this whole great color sequence fits right in with a few dream sequences that appeared in Bollywood movies in the mid ’50s …  The Awara dream sequence comes to mind; so does the dream in Pyaasa, as do the great fantasy scenes in Navrang.  (I also can’t help thinking of a scene from the 1965 movie, Gumnaam, though I guess that was more of a spoof on the earlier films.)  But I wonder if the sequence in Nagin isn’t just the craziest of them all, and the most fun to watch as well.

For this part alone, I should probably not neglect giving lots of credit to the director, Nandlal Jaswantlal, and should probably name the whole art department, too.  I won’t do that, but if anybody is curious about more of the personnel involved, IMbD seems to have a pretty good listing this time.  I’m sure everyone in this long list added a little something to turn this movie based on an old drama into something unique.  And by the end, it does turn out to be quite spectacular.
————————–
P.S.  I know I posted some of these clips a while back, when I was talking about different snake movies made over the years.  But as far as I know, this one doesn’t  really belong with the others, because it’s not a fantasy with people doing snake dances and/or turning into human snakes.  There are old-style magical rituals being practiced here and there and, at one point, there’s even a curse created that’s meant to be carried out by snakes, but the supernatural aspect is understated compared what we see in later films.

P.P.S.  By the way, this seems like as appropriate a movie as any to have reviewed on Lata’s 80th.