Another old Hindi movie that exceeded my expectations.  Because, after listening to this incredible soundtrack as much as, if not more than, any other, and after watching the clips so many times (and already posting a few of them), I had assumed that seeing the movie couldn’t be nearly as satisfying an experience…and I was wrong.  I thought this was a magnificent dark melodrama.

Many people who haven’t actually seen the whole film might think this is strictly a horror movie, and if they don’t know about what happens in the movie later on, they might assume it’s just a haunted house story combined with a reincarnation story.  The fact that reincarnation was a subject in this movie is kind of impressive, because it was probably the first popular Hindi film to focus on that theme.  But really, this turns out to be something a bit different from a supernatural thriller, and much more than one.  What it is more than anything else is a tale about obsessive love and heartbreak.  But on top of that, by the end, it’s also an ingenious crime story and courtroom drama, and it even offers a poignant comment or two about the effects of class and class-based prejudice.   (As you might be able to recognize, ths film has some of the same elements as quite of few of the classic Bollywood dramas of the 50s – only it predated them.)

At this point, though, I don’t want to say more about why initial expectations might be misleading, because this one really did take me by surprise, and I hope that others might have the same experience.  (So, try to stay away from all these reviews with the plot summaries – because after looking at a few now, I can tell you that there are far too many spoilers floating around!)

In addition having a good plot with satisfying surprises, Mahal features several incredibly good performances.  Madhubala is remarkable in this movie, especially considering that she was 16 when this was made.  (That is kind of amazing to me.  I’ve seen other movies with some of the great actresses when they were at around this age, and they really did look much more their age to me. It’s hard to believe that Madhubala was not an adult when she acted in this film.)  Ashok Kumar, I thought, did a fine job, even if the word is that he was overshadowed by Madhubala.  And I, at least, thought that Vyjayalaxmi was excellent; it’s too bad her performance in this movie is not so well known (from what I can tell), once again probably because everyone who saw this was so taken with Madhubala. 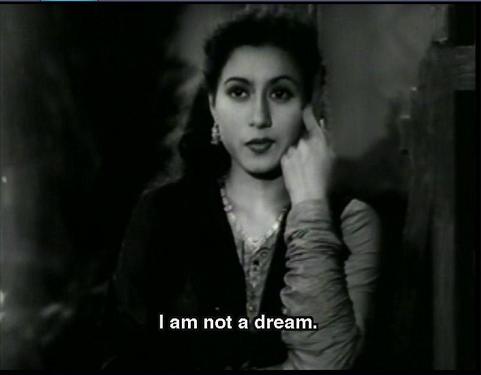 Kamal Amrohi did some impressive directing and writing here; you might say that this showcased his talents at bringing out deep gloom many years before he directed Pakeezah.  And I greatly enjoyed the look of the whole film; this beautiful darkness pervaded everywhere.

I guess I’ve already said enough about this soundtrack by Khemchand Prakash, but, on the other hand, maybe I just can’t say enough…  In addition to being quite moving, the music has a very timeless, atmospheric quality that makes it stand apart from most old filmi soundtracks.  But that atmospheric music wouldn’t be so impressive if it weren’t complemented by such great, dramatic female vocals.  This soundtrack contains very good performances by a few women – I’ve already mentioned enjoying the singing of Rajkumari and Zohrabai in the song “Ye Raat Phir Na Aayegi”…  But of course, the singer whose work really stands out with this movie, and lingers with you long after it’s over, is the other woman who made her breakthrough here…

Because if this was anyone’s movie more than anyone else’s, even more than Madhubala’s, it was Lata’s.