Back to Rajkumari and the “Lost Thumris” of Pakeezah”

A little over two years ago, when I was putting together a post of songs sung by Rajkumari, I did some work to find a song, “Najariya ki Mari,” which was part of the background score that Naushad had put together for Pakeezah after the death of the film’s main musical director, Ghulam Mohammed.  Unfortunately, since I wrote that post in May of 2009, the video was wiped out, but I have just recently found a beautiful copy of the song that Ajay posted in March 2010 as an audio clip (with just one lovely picture of Meena Kumari accompanying it):

And below is a clip of the “Lost Thumris” of Pakeezah. This video has also been taken down from one YouTube channel and put back via another over the years. It is a little annoying that at the beginning of the present clip, we have to sit through 50 seconds of the YouTube user’s advertisements, but after that, it proves to be more than worthwhile. The video features a couple of other songs by Rajkumari as well as songs sung by Vani Jairam, Begum Parveen Sultana, and Naseem Bano Chopra.

The video, as you can see, is of excellent quality, a real pleasure to look at as well as listen to.  It might be a little jarring at times when the sound comes in mainly through one channel, but it seems this was done deliberately to highlight some of the music that would otherwise have been buried even more deeply in the background.  And there is a lot of music buried in the background – in fact, in addition to the identified songs, there are yet more melodies “woven” in.  As the Film Impressions description points out:

In some scenes, like when Sahib Jaan visits her childhood friend Bibban (Vijay Laxmi), Kamal Amrohi weaves in some brilliant thumri melodies as some kind of intricate ambient sound…some of which can be heard in the video below.  Have a look, and listen hard.  There are many riffs that seem to waft in from the neighboring kothas, and maybe a more enterprising viewer can help us identify every lost melody.

Below this description, there is a link to a longer article in the online Film Impressions magazine.  This article contains more interesting information, such as the fact that most of these background songs simply are not available in present copies of the soundtrack:

While the song “Najariya Ke Mari” by Rajkumari still appears in recent releases of the Pakeezah soundtrack, the other compositions of Naushad can only be purchased from the HMV archives.   The song “Yeh Dhuwan Sa Kahan Se Uthta Hai,” composed by Mir and sung by Naseem Bano Chopra, seems lost forever.  The Mehdi Hassan version of this ghazal has, however, been used as the opening track of Sai Paranjype’s Chasm-e-Budoor.  The other background numbers are “Kaun Gali Gayo Shyam” by Begum Parveen Sultana, “Maut Ki Ulfat Mein” and “Mora Saajan Sauten” by Vani Jairam, as well as a couple of tracks by Rajkumari, “Mori Baali Umariya Mein Daag” and “Ab Ki Na Jao Bides.”

And so, I feel especially lucky to have stumbled upon this video the other night, which focuses on genuinely rare songs from a truly brilliant soundtrack.

I found all of these videos on the YouTube site of Tripmonk0, who obviously had recorded a lot of dance from old British TV. (By the way, I seemed to recall posting the first dance, by Asha Parekh, sometime before, but I couldn’t find it in a search, and if I did post it, it’s been a while. The other videos are almost certainly here for the first time.)

———————–
P.S. This post might be considered somewhat along the trajectory of the prior one. However, I’ve been especially in a Kathak mood for the past few days, since I downloaded a 1961 soundtrack to some Kathak dances by Sitara Devi, found at Snap, Crackle & Pop. (That is to say, the soundtrack was found there. Unfortunately, no video of those dances could be found. But it’s nice listening to the music while you picture her dancing in your mind.)

[Note while going over this close to a year later: We lost most of these due to the old copyright violation allegations over at YouTube. But I’m pretty sure I can replace them in a fairly reasonable amount of time. I must keep the post up in any event, because of all the good stuff in the comments section.]

[Note: I have put together this post especially to contribute to the Kapoor Khazana that was begun at Totally Filmi.]

When many people think of the Golden Age Raj Kapoor movies, they think mostly of Raj with Nargis.  Of course, that is appropriate, since Nargis was Raj’s heroine in his most famous movies, the romantic chemistry between them on screen was very intense, and they had a famous (or notorious) off-screen affair as well.  But Nargis was far from the only heroine paired with Raj Kapoor, and if you get into the whole repertoire of Golden Age movies that Raj acted in (including and going beyond all the ones he produced or directed), then you can see interesting combinations such as Raj and Rehana (a particularly funny combo in at least two films), Raj and Madhubala, Raj and Vyjayanthimala (something that Vyjayanthimala herself seemed to regret later), Raj and Waheeda, and Raj and Nutan.  But among the movies without Nargis, the most enjoyable pairing of all (at least as I see it) was Raj and Padmini.  And this on-screen couple, though never quite convincing as enthralled lovers, definitely had their own unique charms.  Of course, people who know this blog well might think that I am biased, given that I have praised Padmini to no end for her dancing and her beauty.  But in addition to my love of Padmini herself in just about everything, I do think there are special qualities in the Raj-and-Padmini combination that help to make it very refreshing, especially if you’ve already seen enough Raj and Nargis…

1. There’s that jovial camaraderie…  Especially in Mera Naam Joker, which was made after the two had known each other for quite a while, Raj and Padmini impress you as a pair of great old friends.

Now, this viewer has no idea whether in real life these two stars might ever have “crossed over the line” in their interactions, and if they did, I don’t want to know about it.  But on screen, even when their characters are supposed to be crazily in love, their relationship seems to be very different in nature from the intense situation between Raj and Nargis with that perpetually burning “aag.”  And sometimes, depending on one’s mood, maybe that’s not a bad thing.

2. Padmini was definitiely earthy enough to be convincing as Raj’s partner in homelessness and general down-and-outness.

By contrast, Nargis seemed too noble, educated, and/or ethereal to be on quite the same level.  (The only exception in the Kapoor movies that I’ve seen was Aag, in which she portrayed a homeless Partition refugee suffering from serious PTSD.  Mehboob Khan seemed more inclined to cast her as a peasant, but in those roles, she had to have a positively saintly character.)

3. Padmini and Raj could be very engaging with their political discussions.

By contrast, while Nargis-and-Raj movies often dwelled on political matters, it seems that the romantic and ethereal qualities of this couple prevented a certain ideological directness that the exchanges between Raj and Padmini could convey.

4. Padmini and Raj seemed like two people who could enjoy many feasts together.  They both had that healthy roundness about them (at least at the times when they acted together). 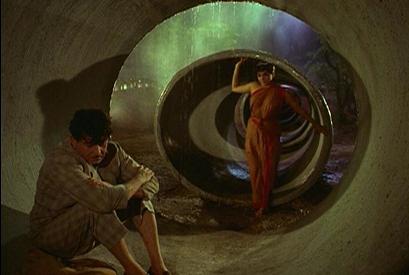 (Let’s face it, by comparison, Nargis, Nutan, etc., looked as though they cold put on a few pounds.)

5. Raj couldn’t dance so well, but wow, could Padmini ever!  So, every dance scene with Raj and Padmini was a good one, even if Raj looked a bit silly sometimes.

When you watch the above two clips, especially, I am sure you will agree that not only did Padmini floor everyone with her dancing abilities; she also helped to create a special kind of chemistry with Raj Kapoor.  In my frequent comparisons to Raj and Nargis, I hope I haven’t been disparaging the latter, because I love Nargis, too.  But I like to point out that, at least as I see it, the Raj-and-Padmini combination stands out just as nicely in their films.

———————
P.S.  Looking at the other posts in the Kapoor Khazana, I noticed a wonderfully detailed review of Mera Naam Joker at Shahrukh Is Love.  This also led me to an interesting thread discussing how much this film was hacked up in different versions, and explaining why I didn’t even recall originally seeing some of my favorite scenes or songs that I caught on YouTube later on.  (Plus, it seems that some of the remaining songs might have been cut up a bit internally, too.)

A few years ago, I also did a more serious writeup of the other great Raj-and-Padmini movie, Jis Desh Mein Ganga Behti Hai.  This writeup refers a lot to another, very interesting review at Philip’sfil-ums.

I’d like to see and write up a third Raj-and-Padmini movie, Ashiq (1962), but I have not been able to find copies, and the song clips available on YouTube are very poor.  (And speaking of YouTube, I haven’t posted Raj-and-Padmini clips from some of my favorite channels this time because Shemaroo has been either blocking the videos or preventing us from embedding them.  Though I think the ones that I have managed to put up here are still pretty good, beautiful in content and lots of fun.)
———————-
P.S. [written a few days later]: June 12 is/was Padmini’s birthday. So, let’s have this post double as the blog’s fourth annual Padmini birthday post. Happy birthday, Padmini!