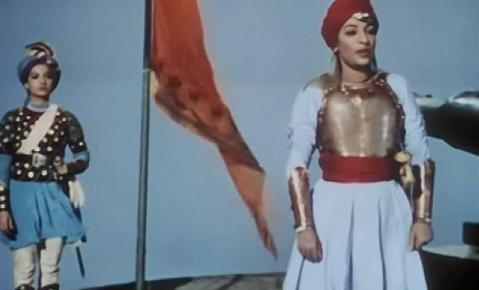 Jhansi Ki Rani, aka The Tiger and the Flame, is a finely made, absorbing war story about one part of the Indian rebellion of 1857. It is the story of Lakshmibai aka Manu, the Rani of Jhansi, a legendary warrior queen who fought brilliantly against the British, with her people holding their own for quite some time and against many odds. According to the entry in Wikipedia, she was described in one British report as “clever, personable, and beautiful,” and “the most dangerous of all Indian leaders.” And the woman who plays her in this film – Mehtab – conveys all those qualities very convincingly.

Jhansi Ki Rani was actually distributed in the U.S., via United Artists, and there was a lot of Hollywood participation in its production. It was made on a pretty big budget, and it was the first Indian film made in Technicolor. (Aan was the second, though it got released first.) It was very well directed by Mehtab’s husband, Sohrab Modi, who also had a big part in it (which, of course, he played well). And thanks mainly to Mehtab’s excellent performance, it is also very moving at the end. In fact, even though almost everybody who watches this will probably know from the start how it’s going to end, I would bet that the majority of viewers will not be able to avoid shedding at least a tear or two.

Unfortunately, Jhansi Ki Rani is also known as a legendary flop, causing a big loss for Sohrab Modi. And that is a shame. It is a bit of a mystery why that happened, but some have suggested that it’s because it wasn’t really like most Hindi movies nor most Hollywood films, but something a bit strangely in between. I have noticed that unlike many of our favorite Hindi movies of the time, it doesn’t contain hits sung for the actors or even any distinct songs (although it does have a couple of interesting dances and decent music here and there). A few sources also mentioned that it was a little baffling to a lot of American viewers because they did not get the historical references and the history in general did not have the same impact for them. But for whatever reason… This film definitely deserves more recognition than it got, and I think that goes double – or triple – for its star, Mehtab.

P.S. As should be evident from the initial link, this is another of those Tommydan uploads, and I am glad that it is, because I probably never would have gotten around to buying the DVD. One more thing worth noting about the upload is that for people who don’t speak Hindi (just English), there is no issue about subtitles here because all the dialogue is in English! (It was filmed simultaneously in two different versions, one in Hindi and one in English – for the American audiences.)

P.P.S. A few reviews that I have read also noted the film’s historical accuracy. So, if you know the history (or if you look it up), then you don’t have any real need for a plot summary.