While looking around on YouTube, I found a video described as a new “History of Kathak dance” which turned out to have a slightly different purpose. The real mission of this video was to praise Roshan Kumari and, as the narrator, himself, asserted, “to propagate and popularize Roshan Kumari’s dance style.” Now, I guess we could say that the video was framed in a slightly misleading way (although it did talk about the history of Kathak a little in the beginning), but I was actually pleased when the narrator revealed its true purpose (slightly beyond the halfway point) because Roshan Kumari is one of my absolute favorite dancers. (Actually, I would guess that she is one of many people’s favorite dancers, thanks to her incredible performance in Stayajit Ray’s Jalsaghar.) Additionally, I would say that it was about time that I had the chance to present another substantial source of information about her.

[This is the documentary video. The dancer in the cover pic is Mukta Joshi.]

I  did write a little about Roshan Kumari just a month and a half ago in my post Favorite Scenes Showing Kathak Footwork . . . But the last time that I discussed this great dancer in detail was in my post, Finally, A Little More Info About Roshan Kumari, which I put up on November 28, 2010. In that post, I relayed some information that I had gotten from a couple of Web sites devoted to Roshan Kumari, including one set up by her student, Mukta Joshi. (Unfortunately, that site has disappeared, but, as you’ll see shortly, there are plenty of other reasons here to mention Ms. Joshi.)

Following that post, I was treated to a very informative string of comments and conversations that went for a couple of weeks, then picked again more than a year later, at different points in 2012, and then again at different points in 2014. By the end of 2014, the post and comments, taken together, really did give a good amount of information about Roshan Kumari. In addition, at a point in time during the middle of the long conversation here, Cassidy Minai published her own informative and highly descriptive post, Film Classical Dances of Roshan Kumari.

After all of that, I certainly knew a lot more about Roshan Kumari than I had a couple of years before (and I would like to think that a number of people reading my blog had learned a lot more, too). But now, several years later, I am delighted to say that I have learned even more, thanks to this documentary. 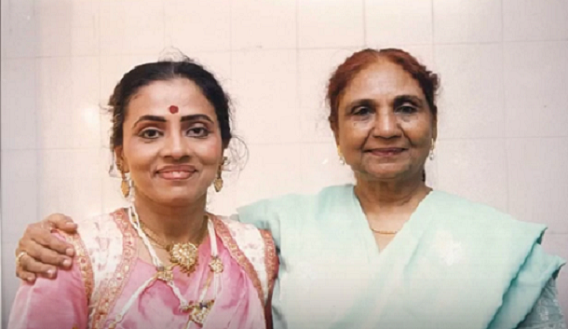 The part of the documentary where it becomes clear that this really is a video about Roshan Kumari starts at 9:10. At 9:15, we get to see a brief statement being made by the contemporary Roshan Kumari. I appreciated that, because I remember that during the time of the old post, neither I nor several commenters could find a contemporary picture of her. But now, the contemporary Roshan Kumari certainly is visible, in this video and in the others that I’ll get to. Unfortunately for me, Roshan Kumari only speaks Hindi here (and I really have lost most of the Hindi language skills that I acquired when I tried to learn the language a few years ago). But within a couple of minutes, the narrator returns, speaking English (albeit in a way that I don’t always find easy to follow), as he delves into discussion of Roshan Kumari’s past, including her parents and her gurus. During this time, we see some very nice photos, including an excellent one of Roshan’s dance guru, K.S. More.  (Yes, that is the same K.S. More who may have been Cuckoo’s husband at one time, as speculated by Tom and Mel in our long conversations under the Cuckoo posts). And that is all wonderful stuff, but the best part of the video follows shortly thereafter, as we are treated to a piece of Roshan’s dance in Jalsaghar, while the narrator mentions some of the qualities that makes it so good. These, as he says, include: “forceful footwork . . . clear, elegant body movements, speedy chakris, use of complicated, rhythm-based compositions . . .” It is shortly after this description, at the end of the excerpt from Jalsaghar, that the narrator asserts, “It is our aim to propagate and popularize Guru Roshan Kamari’s dance style, and with this intention, we have started the work on this video.”

As the narrator tells us toward the end of this Kathak documentary, Mukta Joshi founded a school, the Nrityadahara Kathak Research Institute, where she specifically teaches the Jaipur Kathak dancing traditions that she learned from Roshan Kumari. This actually is not the first of Roshan Kumari’s students whom I have heard about or from. A few are obviously happy to talk about their famous teacher, whom they always recall fondly. In the comments thread a few years ago, I received some nice words from a former student of hers named Shelina Verani.  And I have also been very familiar with the dance work of another Roshan Kumari student, Aditi Bhagwat (in fact, I posted her very sweet dance cover of “Dil Cheez Kya Hai” on April 3, 2013). But I don’t have a specific recollection of exploring the dances of Mukta Joshi, and I don’t think I have presented any in this blog before. So, I am very happy to present a dance of hers in this post. I am particularly glad about finding this dance, because it also includes Roshan Kumari, who sits on the side with the musicians, doing the parhant (that is, vocal recitation of the syllables – bols – that make up the taal/rhythm). This dance comes in two parts (from a broadcast on DD national TV aka Doordashan), and while the first part is good, the second part is even better. Mukta Joshi proves to be a fine successor to Roshan Kumari, and I bet that we would be able to say the same about some of her students, too.

In my last post, I pointed out at the end that I was finally drawn into being a big fan of Hindi films when I saw Shree 420, in April of 2008. Of course, that was far from the only thing that drew me into Hindi cinema or Indian cinema in general; it’s just that it was the movie I watched that brought me to the point of becoming an eager consumer of entire classic Hindi/Bollywood films.

But, as I mentioned, by this time, I had already been watching lots of song-and-dance videos and listening to lots of Golden Age soundtrack music.

Going back to the end of 2007, I had been especially drawn into Indian cinema by two of its classic dancers, Padmini and Vyjayanthimala. I know I had seen a Padmini dance or two years before (I had had access to some clips of old Bollywood movies on certain TV stations in the past) and I may have seen a Padmini dance incorporated into a rock video related to something from the ’90s “Asian Underground.” But I wasn’t fully aware of who Padmini was and the great dances that she did until I started watching old clips of her in the fall to winter of 2007. After seeing a bunch of clips, I did run right to some movies, but they were mainly Tamil films (which I could find with English subtitles online). As I recall, the first of those films was Uthama Puthiran (where I also got to witness the greatness of Ragini and Sivaji Ganesan, and where I also found the iron mask that became my blogging avatar). And I probably watched at least a couple more around that time…

But Padmini’s appearances in Hindi cinema were relatively limited – at least compared to Vyjayanthimala’s – and this was especially true when it came to what was available on DVD. (By the way, in case I didn’t mention this – or it isn’t obvious – Hindi/Bollywood DVDs were always much more available in New York than Tamil films.) So, the first dancer who caused me to gobble up lots of full classic Bollywood DVDs – in the spring to summer of 2008 – was Vyjayanthimala, who just happens to be celebrating her birthday as I write this post.

In June or July of 2008, I saw two prominent Vyjyanathimala movies from the ’50s, Sadhna and Naya Daur. Both of these films impressed me on all fronts – dance, music, social themes, song lyrics (subtitled, of course) and acting. But out of the two, the real Vyjayanthimala fest was Sadhna. I can distinctly recall the time I brought that DVD home from the store, put it into my player, and nearly fell over at the sight of her great dances as they appeared within the film.

And when I think of that experience, I recall that the first dance was the one that impressed me the most:

So, shortly afterward – during that summer and early fall – I ran out and grabbed a whole bunch of her films…

And here are some examples of the major dances from them:

(By the way, this song/dance is not labeled in the video, so I’ll just add that it’s the Bharatanatyam dance that surrounds the song “Murli Bairan Bhai.” Some people consider it all part of the same song/dance performance, but I like to consider the Bharatanatyam performance separately, since I think that part, alone, is much better than the rest; in fact, I’ve often considered it my favorite.)

Meanwhile, I continued to enjoy clips of dances by her on YouTube without watching the entire films. I never did get to see all of the 1969 film Prince, but in the summer of 2008, I saw some of my favorite dancing by Vyjayanthimala in a scene from that film, the famous competition she had with Helen to the song “Muqabla Hamse Na Karo.” And just recently on YouTube, I saw that someone had excerpted Vyjayanthimala’s parts from that competition and made a video of those excerpts alone. Now, I don’t mean to slight Helen, but I very much appreciate that someone did this and I am happy that I can post such a video here.

And with that, I think I will wrap up this post for Vyjayanthimala’s birthday – her 81st or 84th, depending oh whom you ask – which doubles as Part 2 of my post for the tenth birthday of this blog.

P.S. Seven years ago, I posted another Vyjayanthimala birthday tribute which included clips of seven dances, most of them actually lesser known than the ones above. One has vanished (and I have no idea at this point what it was) and the other is a repeat of a film clip included here. But if you go to that post and watch the others, that adds up to eleven wonderful dance scenes that you can enjoy in celebration of Vyjayanthimala’s birthday. Of course, you can also go to YouTube and other posts on this blog to find many, many more.