Delving Into Dalrymple (The Last Mughal and, especially, White Mughals) 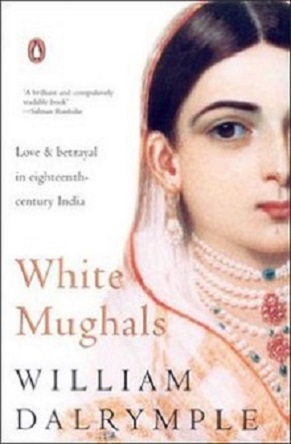 During the past month, I’ve had the very interesting experience of delving into two works by the man from the UK who is probably the best-known writer of Indian history in the English language today (and for good reason), William Dalrymple.

The first Dalrymple book that I delved into was The Last Mughal, which anyone familiar with the subject will recognize from its title as being about Emperor Bahadur Shah Zafar II. I had become very curious about this subject because of references to Zafar (as he is fondly known to many) and his poetry in Hindi films and related song performances. So, when I picked up this large book (445-plus pages in pretty small print, not including notes and other chapters outside of the main body), I looked forward to reading a whole lot about Zafar and his poetry. Actually, though, I found that most of the book was not really specifically devoted to either.

I think the book is better described by its subtitle, “The fall of a dynasty: Delhi, 1857.” The bulk of this book is devoted to the details of war and the fall of Delhi. In the earlier part of the book, there are some interesting descriptions of a Mughal court that tries for some time to ignore its impending doom, with great amounts of time and energy being spent on art, poetry, music, dancing, and assorted decadent indulgences that the aristocracy actually can no longer afford, considering the peril that it’s in. That part is the most interesting to me. Much more of the book, though, is devoted to the details of battle. This includes some interesting information about strategic successes and failures on both sides, but ultimately, we end up reading much more about atrocities. (Originally, there are some atrocities committed by the mutineering Sepoys, but those, of course, are far outweighed by the ones dealt out by the British at the end.)

I have to admit that I was not looking so much for a long war story, but, on the other hand, I must commend Dalrymple for the obviously voluminous research that he did, sometimes extending into incredibly minute details, and for his skill at conveying all these details so clearly that his writing seems very close to flawless. Most importantly, after reading The Last Mughal, I felt far more educated about historical circumstances that I have seen so often referred to in classic Indian films.

The Dalrymple book that I really enjoyed was the second one I read, but the earlier-written of the two, White Mughals. In The Last Mughal, Dalrymple often refers back to the era that White Mughals covers (that is, the late 18th century and early 19th) because it included a time when many British occupants of India were much more receptive to Indian culture, and the self-superior racist attitudes often associated with the British colonization of India were not as prevalent. In the Introduction to White Mughals, Dalrymple also points out that this is a fact of history that needs to be more widely revealed:

The Kirkpatricks inhabited a world that was far more hybrid, and with far less clearly defined ethnic, national, and religious borders, than we have been conditioned to expect, either by the conventional Imperial history books written in Britain before 1947, or by the nationalist historiography of post-Independence India, or for that matter by the post-colonial work coming from new generations of scholars, many of whom tend to follow the path opened by Edward Said in 1978 with his pioneering Orientalism. It was as if this early promiscuous mingling of races and ideas, modes of dress and ways of living, was something that was on no one’s agenda and suited nobody’s version of events. All sides seemed, for different reasons, to be slightly embarrassed by this moment of crossover, which they preferred to pretend had never happened. It is, after all, always easier to see things in black and white.

(By the way, that passage also reminded me a lot of a passage from another book by a different writer, which I discussed somewhat a year and a half ago. Interestingly, in both cases, the writers found fault with popular writings by Edward Said. I will add more about that in a P.S. below.)

Broadly speaking, especially in the first few chapters, White Mughals is devoted to men who moved to India in service to the British East India Company but who ended up eagerly adopting Mughal styles of dress and living because they admired the culture.

There also is a point frequently made that some of these British men were attracted to such a lifestyle because they could indulge their more sensual cravings in ways that they would have missed out on completely if they’d stayed at home. These sensual pleasures included great indulgent dining, leisurely enjoyment of sublime poetry and music, and the ability to keep several or a dozen Indian women in a harem. (Of course, for the most part, these were men who found a place among the aristocracy.)

But the heart of White Mughals is the romance between two people, an officer in the army of the British East India Company named James Kirkpatrick and an Indian Muslim noblewoman (or noblegirl, really) named Khair-un-Nissa. With great skill, Dalrymple relates all the joy and sorrows, victory and (most of all) heartbreaks involved before, during, and after this affair (and marriage). That is why White Mughals also is better described by its subtitle: “Love and betrayal in 18th century India.”

James Kirkpatrick evidently had had some indulgences with women before he met his great love in this tale and he even had some kind of harem (though not a large one). But these experiences were insignificant compared to his one-to-one romance with Khair. The girl whom he fell in love with was only 14 when he met her, which would certainly raise some questions in the present day, but Dalrymple spends very little time discussing the notion that Kirkpatrick might have in some way taken advantage of her. In fact, he stresses the evidence showing that Khair was the one who started the relationship. Actually, if anyone conducted any manipulation here, it was her mother, grandmother, and other female members of her family, who helped to engineer the meeting and encouraged the romance in part to find a way to get Khair out of an undesired arranged marriage. (Obviously, in 18th century India, 14 was a perfectly marriageable age, at least for a girl.) James does end up marrying her, himself, after a short while, and in the process, he causes great scandal to himself and risks a lot of hardship. Part of the reason for this is that the White Mughal era is actually beginning to wind down as the more typically colonialist and racist attitudes are starting to take over with the increase of British power in India. In James’ own immediate situation, certain officials enter the picture who cause him greater trouble and he is left to do one thing or another to negotiate around these hurdles although, for a while, he manages to maintain and even increase his professional status. Unfortunately, he does not do as well at maintaining his personal health, and Dalrymple strongly suggests that this deterioration in health was directly related to the social stress. Later in the book, we are also provided with information about how the deteriorating social relationships of the era harmed Khair-un-Nissa, who actually had to face a lot more heartbreak in her life years after James was out of the picture. (By the way, I hope that I have not just written too much of a spoiler, but there are plenty of hints from the beginning that life for these two lovers will not end up happily-ever-after.)

The connections that Dalrymple makes between the affairs of his main subjects and the social changes that he is eager to write about are very intriguing and quite ambitious. But by the end of White Mughals, I felt that the writing shone most in the conveyance of emotional drama, and I found the drama here to be more moving than many that I’ve read in fiction.

I would like to find some passages to show how well Dalrymple builds up this drama, but this is a little difficult because he is not the kind of writer who seeks to dazzle a reader with one or another showy paragraph. The effect of the good writing in this book is cumulative. Certainly, Dalrymple is not averse to dropping a little sentence at the end of a chapter to create a cliffhanger that will keep you turning pages (an obvious trick but fun nonetheless), e.g.: “Yet even here the story does not quite end. For after a gap of more than thirty years there is one, final, extraordinary coda.” But the real reason I kept turning the pages was that I enjoyed the way the facts and circumstances slowly built up and progressed, with one good layer of information following the other, all related in a crafty and skillful way. I think it also became clear in this book that William Dalrymple absolutely loves writing detailed histories centered on solidly fleshed out individual subjects and I believe I caught some of that relish too. For me, this turned out to be a highly enjoyable reading experience in addition to being very educational.
———————————————————
P.S. The passage that I thought about after reading the one that I quoted from Dalrymple was from Wendy Buonaventura’s Serpent of the Nile, which I reviewed as part of a more wandering post back on December 23, 2016. I typed out the passage back then, too, but here it is again, for comparison with Dalrymple’s:

The current, widely held view of Orientalism derives from Edward Said’s thesis that the West has exploited, misunderstood and even invented the East for its own sinister purposes. From the wealth of material available, it is easy to select examples to suit this theory and ignore those which do not. However, Orientalist attitudes to the Middle East are as varied as human beings. An obsession with European colonialism has unfortunately blinded many critics to the complex interrelationship which has existed between Europe and the Arab-Islamic world for hundreds of years. This obsession has merely served to prolong the misunderstanding which exists between them. Many Europeans who went to the Arab world compared the life they found there favorably with that of Europe.