Posted by Richard S. on November 30, 2013
Posted in: Uncategorized. 9 Comments 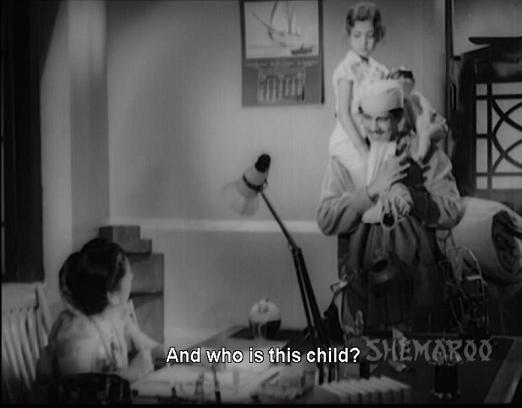 The biggest reason to watch Mehboob Khan’s Sister is for the chance to see the early appearances of a couple of the greatest and most beautiful actresses of Hindi cinema’s Golden Age. In the past, I was delighted to see a few minutes of Baby Meena (i.e., Kumari) at age 11 in Lal Haveli (1944), and I also knew of one song that she did in Sister, which I posted a while back.

But I didn’t realize that we get to see Baby Meena in Sister for more than half an hour, during a significant part of the film, playing the younger-child version of the heorine, Bina. And I didn’t realize that she was such a good actress even back in the early ’40s. She is actually very convincing as child actresses go, and she is also incredibly cute.

We also get to see an incredibly cute girl playing Bina at age 15 (and maybe a couple of years older toward the end of the film). And that girl is Nalini Jaywant, in her first starring role (or possibly her first film appearance altogether). Nalini is quite adorable in this film, and she is very good, too. Her role required a good deal of subtlety at times, as her character needed to navigate the emotional minefield of living with a brother who was very unhealthily obsessed with her (the disturbing center of the film that we’ll get to in a moment). On the other hand, this character could also experience a lot of joy and be very playful, and Nalini was excellent at portraying the whole range of emotions.

At the same time, 15-year-old Nalini does seem appropriately childish. So in this film, she is not quite yet the great beauty that she would turn out to be in the films of the ’50s. But there is another actress in this movie whom we get to see toward the peak of her beauty (since she was probably 19 at this time – a ripe old age for a ’40s Hindi film heroine), and her name is Husn Bano. It is a shame that we don’t really get to see her until the latter part of the film (she is kind of a secondary character, though she eventually assumes greater importance). But even though she appears for such a short amount of time (from well more than halfway through), she, alone, could make the entire film feel worthwhile.

In addition to getting the chance to see all these wonderful actresses at historic moments, there is another, almost equally compelling reason to see Sister, and if you have been reading this whole post and playing all the clips above, you know already that it is the gorgeous music. It’s difficult to describe what makes Anil Biswas’ music from the 1940s so great (or at least it is difficult for me), but this music is positively magical. And one of the best songs, by the way, is acted and sung by someone who makes only a brief appearance; i.e., Miss Iqbal. If anyone knows more about this Miss Iqbal, please send a message or comment! And, by the way, does she always wear such fabulous face jewelry?

***
Of course, since this is supposed to be a film review, maybe it would be appropriate to discuss the story/plot. But that part is a bit uncomfortable. As mentioned above, the main character in this film, Amar (effectively played by Sheikh Mukhtar), is unhealthily obsessed with his sister. From the moment that he rescues her from the ruins of an earthquake, he cannot stand to spend time without her. (By the way, that rescue is dramatic, as it was a big earthquake that seemed to have killed everyone else for miles, yet Bina was protected by the edge of her crib, which stopped something very big from falling on her. That serves to explain why Amar is so grateful for the miracle of being able to keep his sister. But it sure doesn’t explain everything!) In fact, his obsession with Bina is so great that it prevents him from getting into any romantic relationships. He actually takes drastic measures to escape two women who are in love with him, all to protect his close relationship with Bina.

Though if Amar chooses to deprive himself in this way, that at least is entirely his choice to make. The problem becomes much more serious when he seeks to deprive Bina in the same way. Thus, when Bina’s romantic interest Rajendra (Harish) enters the picture, the picture becomes even more disturbing.

For this viewer, at least, it starts to become a bit difficult to stand. Fortunately, though, Mehboob Khan’s expert direction (with relatively good pacing, etc.) prevents the rough parts from dragging on for too long. Additionally, since this is an early ’40s Mehboob Khan film, there is a good amount of content devoted to the issue of rich vs. poor, the class struggle, etc. Thus, there is interesting social commentary contained within the discussions and arguments between Amar, who is a poor worker (though he has not always been), and Rajendra, whose family owns the factories, and this makes Amar a slightly more sympathetic a character than he might have been otherwise (though that isn’t saying much). Adding to the social(ist) intrigue, Rajendra actually is a very progressive man who would like to see a more egalitarian society, and his father turns out to be fairly liberal in this direction also, though he sometimes puts on a good show of being the opposite. Some of this material is actually pretty intellectual, but it also makes for an entertaining distraction that prevents the core of the film from becoming too negative/depressing.

And (not to spoil anything, but…) everything turns out to be kind of sweet by the end of Sister. So, strangely enough, it turns out to be a pretty uplifting film. It’s not quite as uplifting by the end as the last couple of early ’40s Mehboob Khan films that I saw (and reviewed here), nor is it quite as inspiring. But by the time the final credits rolled, I was feeling very glad that I had seen it.

——————–
P.S. According to a little review at Cineplot, there is an interesting social purpose for the incest theme in Sister, because “The incest motif was widely used to represent the complexities of an ‘Aryan’ agrarian-feudal patriarchy.” Unfortunately, from my perspective, I think I would require a little more information before I could begin to understand what that means.

P.P.S. As is obvious in the screen caps above, the copy of the film that I watched was from Shemaroo, within their Vintage series. Shemaroo deserves credit for issuing these vintage films, which would not have been available in the U.S. with English subtitles a few years ago. The visual quality is also relatively decent (much better than in the song videos that I’ve linked to), and the subtitles aren’t bad. Though this is not to say that it can’t be improved upon… And according to a message that actually appears at the beginning of the DVD, the copyright laws on the film have expired and it is in the public domain, so there should not be any legal risk involved in working with this one, either.

My Favorite Diwali Song of All Time

Posted by Richard S. on November 2, 2013
Posted in: Uncategorized. 6 Comments

Due to time limitations, my Diwali list will have one song this year. This is my favorite of all Diwali songs.