Ashok Kumar and Sitara Devi Singing for Themselves in Najma (1943)

Everybody Should Go To Memsaab’s for Roti 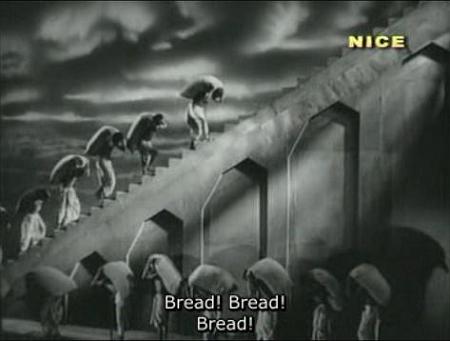 Ah, Roti (1942) – what a delicious film!  I posted about this movie and discussed it further with people in comments a couple of times before, and I saw plenty of scenes and knew all about the plot and the fantastic cast…  But thanks to Memsaab, first I got a good detailed plot summary, and then I got to download a full copy with subtitles (done by Raja – who also recently subtitled Tom’s video of the Helen vs. Vyjayanthimala dance in Dr. Vidya, which appeared in this year’s Vyjayanthimala brithday post).  This is a straightforward message movie with a moral (no ambivalence about it whatsoever), but at the same time, the plot is compelling, and the chracters range from diabolically fascinating to positively adorable.  This really is the greatest of Mehboob’s communist adventure films!  Plus, there is some beautiful dancing here, and we get to hear one of the best soundtracks by Anil Biswas.

…Which I think, though I don’t know much about this stuff, might have been  inspired a bit by “Bahut Kathin Hai Dagar Panghat Ki” (as heard here)…

This is a fun clip I found on YouTube that begins with a bunch of pics of South Indian (mostly Tamil) film stars, then shows Sayee Subbalakshmi dancing in Alibaba and the 40 Thieves.  And this is a unique Sayee Subbalakshmi clip because three quarters into the video, Sayee and Subbalakshmi are actually labeled, so those who don’t know yet can see which one is which!

Speaking of Sayee Subbalakshmi, Sayee’s son S. Ratchagan has been writing to this blog for the past couple of days, providing a lot of good history about Sayee and Subbalakshmi and their family (which includes some very interesting singers, etc., as well), as part of long-ongoing comments to a post about this great dancing duo that I originally put up back in October 2008.  Some people have already seen these latest comments because they are linked to from the comments list on the sidebar, but for those who haven’t, I very much recommend visiting that old post now for a lot of information that you probably haven’t read before.  (Plus we have been promised yet more – which I am very much lookiing forward to!)

An old blogging acquaintance who goes by the name of DJ Teo at the college radio station of the University of Arkansas (of all places), has put together a very nice “All-Pakistan” episode for his world music show Interzone (broadcast a few days ago, on August 17).  And DJ Teo’s latest blog post promotes a very urgent cause, as it links to Relief4Pakistan (a “grassroots donation campaign” in response to the floods), in addition to containing a playlist and podcast for the All-Pakistan show.

Personally speaking, I was pleasantly surprised by the eclectic content of this show, which has some contemporary material but also has a lot of old film music and tradtional material.   It includes some fine songs from Reshma, Abida Parveen, and Nahid Akhtar.

I wasn’t completely satisfied with the Noor Jehan content (just one song, “Sadqay Sadqay Lal Qalandar” – why’d he chose that to be the Noor Jehan song?), but that’s OK, because I encountered some very charming surprises too. For instance, while it’s too bad that this show didn’t include one of Noor’s songs from Intezar, it did include Kausar Parveen’s song from that film, which stuck with me for a while after hearing it (for the first time in a while)…

Overall, this was a very good radio show!

A Couple of Delightful Songs from Sheesh Mahal (1950)

Vasant Desai is becoming one of my favorite music directors. Apparently, he could turn out delightful music for Sohrab Modi’s films just as easily as he did for V. Shantaram’s. These are a couple of very nice songs from Sheesh Mahal. The whole film is available online, but without subtitles. Near the beginning there are a bunch of great dances and group performances that actually remind me of some Shantaram films. And there are very good distinct songs, too, recently put up on YouTube in new versions by Bhandari2k (though I think some of these were also available from wwwgeetaduttcom).

Here’s a nice one of the good life at this Sheesh Mahal, with vocals by Geeta Dutt and Shamshad Begum:

And I like this duet a lot, from Geeta Dutt and Mohammed Rafi. (And who’s that guy playing the banjo? Uh-oh…)

(I put this one up for historical reasons – another archeological find. But no, it’s not one of my favoirte Vyjayanthimala dances.)

Here’s a Swinging Song from Aag

Posted by Richard S. on August 8, 2010
Posted in: Uncategorized. 22 Comments
Dances on the Footpath
Create a free website or blog at WordPress.com.
Loading Comments...