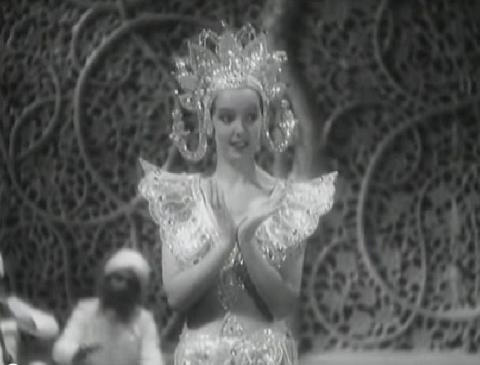 [For those of you who have happened upon this page only to see a bunch of blank frames, please note that I am working to replace these lost clips – or at least some of them – very soon.]

I seem to be a bit stalled in terms of deciding what classic material from Indian cinema I am going to post about next, so I thought I would venture a little bit to other countries for the moment. And while I have already ventured to Egypt a few times, strangely, I haven’t written about much dance from the west. So for the present blog post, I have decided to post some of my favorite dancers and dances from films made in a few western countries – namely, the U.S., England, and France. Also, I have decided to move away from the 1940s for a brief time, so instead, we’ll be looking at the 1930s.

I thought that the nicest way to start would be to post a fine piece of Orientalism from imperialist England. This is Jessie Matthews, a British dancer/actress/singer who is actually one of my favorites from anywhere. (Also, looking on in this clip – as some people might notice – is a very young Robert Young.) From 1936, this is Jessie’s “Indian tap dance”!

Also in England in the 1930s, there was a child-prodigy tap dancing actress named Hazel Ascot. She has sometimes been referred to as the “British Shirley Temple,” but I don’t think Shirley had this kind of dancing skill. This scene is from a 1937 film, Talking Feet, and the tap dance is very impressive.

Back to Orientalism, I think this French film must contain every kind of “exotica” that one could think of… Actually, I haven’t watched the whole film, but I stumbled upon a great segment here. The main dancer is the great Josephine Baker. Her part is wonderful here – as I expected – but I was also very intrigued by the segment that precedes it, which is very much like a Busby Berkeley scene, only it’s as though Busby Berkeley had spent his youth with European Dadaists. (The actual director is Edmond T. Gréville, and, no, I don’t know anything about him – or about anything else having to do with this movie. But I am glad I found this!)

Speaking of Busby Berkeley, this is one of my favorite early Busby Berkeley scenes, from Palmy Days, made in 1931. Notice that at one point in this dance, there’s an Indian mythological reference. This multi-armed goddess routine was repeated two years later in Gold Diggers of 1933, and the actress who led it then was Ginger Rogers. But the actress leading it here isn’t Ginger Rogers; it’s a 14-year-old Betty Grable!

In my humble opinion, the greatest female tap dancer of all was Eleanor Powell. Actually, among the stars we know about, she was probably the greatest tap dancer, period. (Fred Astaire once said that when he danced with her, he felt intimidated, because she was the only dance partner he had who was at least as good as he was.) I have actually posted this dance once before, showing how it influenced a dance by Sitara Devi in Roti. But I’m going to rerun it here because it is my favorite Eleanor Powell dance, and it is by far her best dance from the 1930s. From the 1939 film Honolulu, this is her “hula routine,” and it’s positively heavenly.

P.S. I realize that there were good male dancers in western films from this time period, too (and they weren’t limited to Fred Astaire). But I think I will have to get to them another time.

P.P.S. Some of these clips were taken from a YouTube channel that has given me a lot of enjoyment. It’s called GoodOldDaysReturns.