Posted by Richard S. on November 8, 2014
Posted in: Uncategorized. 2 Comments 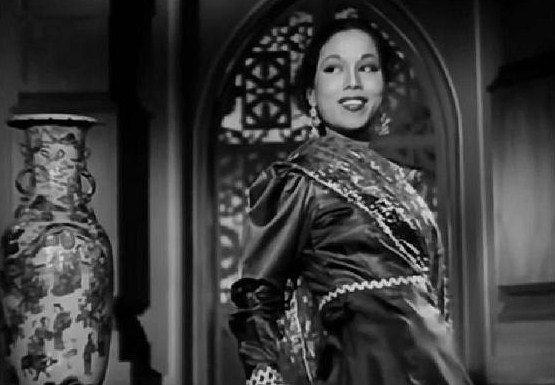 [With much sadness, I must report that a little more than two weeks after I wrote this post, Sitara Devi died. According to family members, she was 94 years old. RIP to one of the most wonderful actress-dancers in the history of Indian cinema, who went on for many years to be one of the greatest Kathak dancers anywhere.]

It took some time to get clear idea about Sitara Devi’s date of birth. There is still conflicting information in the press about her age, with reports varying from 93 or 94 to 96. But I did see some information fairly recently that she was born on Diwali in 1919 or 1920, and a recent search revealed, in big font, that she was born on November 8, 1920. Diwali in 1920 did happen around November 8 (I looked that up, too), so I will accept that date. I don’t know where the conclusion in large font comes from, but I think it’s OK to assume she’s 94 now, even if she might be 95.

Anyway, unlike so many others whose birthdays I’ve celebrated here, Sitara Devi is still alive and… I would like to say well, but as I was doing my most recent Internet search, I stumbled upon news that she has been in the hospital for over for two weeks and went into the ICU on November 6 or 7. But the surgery that she had had reportedly went well, and some people insist that she is going to be OK. Let’s keep the proverbial finger crossed…

It’s been enjoyable to read about Sitara Devi’s lively activities even during the past few years. I think she’s even danced very recently (though it might have been the sort of dancing that she could do in a chair). Just a few months ago, I also read that she was continuing with an ongoing, 30-year-old legal battle with the government to get some land so that she can set up a dance academy.

She is and always has been quite a unique woman. (I wonder if she still chews paan as much as she used to…) She’s always been an amazing dancer, and she was once a wonderful actress and very good singer, too.

I know that I have posted quite a few of her excellent songs and dances on this blog, but I have done them mainly one at a time or within reviews of films that she’s been in. For this post, as I have done with other great performers, I would like to show my favorites together – seven favorites, of course. Some of these are very lively and energetic dances, because she was extremely energetic (as Saadat Hasan Manto pointed out when he called her a typhoon). But I have also included a couple of slower and less frenetic scenes that highlight her individual humor and unique expressions, because these have been an important aspect of her performances, too. I thought about picking a dance from seven different films, but I had to choose two from Roti, because I could not bring myself to drop one of them. Nonetheless, if I may say so, I think these seven scenes represent a pretty nice range…